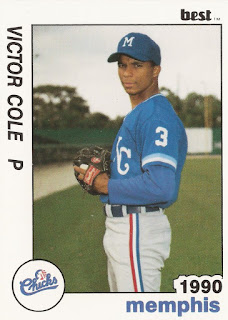 Before going out for his first major league start in 1992, Victor Cole's pitching coach with the Pirates gave him some advice, Cole told The Beaver County Times later.

"He said just throw strikes early and then go after them," Cole told The Times. "That's all I did. I felt pretty good. I got excited a few times but for the most part I was relaxed."

Cole ended up going five innings, giving up three earned runs and getting a no decision. It ended up being one of just four starts for Cole in the majors, eight total outings.

Cole made the Pirates that year in his fifth season as a pro. The hurler, who was born in Russia and raised in California, was originally taken by the Royals in the 14th round of the 1988 draft, out of Santa Clara University.

Cole split his first year between short-season Eugene and single-A Baseball City, pitching as both a starter and a reliever. He then split 1989 between Baseball City and AA Memphis. At Memphis full-time for 1990, Cole got into 46 games, six starts, with an ERA of 4.35.

Traded to the Pirates in 1991, Cole played the year at AAA Buffalo, returning there to start 1992.

Then, in June, Cole made Pittsburgh. In his first outing, Cole came into the game, the Pirates down 6-1. By the time he was done, Cole was charged with four runs of his own over 1.1 innings of work.

Cole split time in 1993 between AA Carolina and AAA Buffalo. By the end of the year, he was with the Brewers at AAA Denver.

He continued playing in the minors for another eight seasons, going through the Royals, Padres, Cubs and Cardinals systems before he was done. He even played in Korea in 1997 and played independent ball.

Cole then settled in Memphis. His son Victor Cole, Jr., a product of a local Memphis high school, signed on to play in 2013 for the University of Memphis, according to The Memphis Commercial Appeal.

The younger Cole told The Commercial Appeal in January 2012 that he was blessed to have a father who had shared his knowledge and passion of the game with him.

"Both nature and nurture have played huge roles," Cole Jr. told The Commercial Appeal, "because I was born into the baseball lifestyle and I've enjoyed every moment of it."