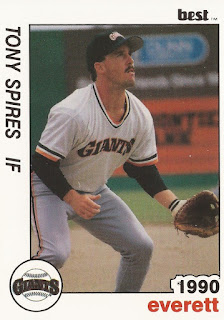 Tony Spires' Coastal Carolina team was already behind by a lot, but Spires did his best at trying to help the team inch back, knocking a triple and soon scoring.

Later in that May 1987 game, Spires tripled again, knocking in two, according to The Rock Hill Herald.

The Coastal Carolina comeback attempt fell short, but Spires did add to his career triple total that eventually hit 13. Spires' career triple total, amassed from 1987 to 1990, still had legs in 2012, still tied for seventh on the all-time Big South Conference record book.

From Coastal Carolina, Spires moved on to the Giants, taken by the club in the 20th round of the 1990 draft.

His professional career, though, was a brief one, lasting just two seasons, Spires never making it close to the majors.

At Coastal Carolina, Spires hit well enough to earn All-Big South honors twice, in 1988 and 1990, and making the All-Tournament team in 1990.