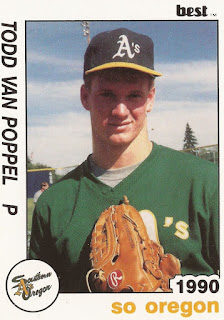 By mid-1998, Todd Van Poppel's career hadn't gone has he or anyone else had hoped. But he was still playing.

The former Oakland first-round pick with the can't-miss arm had was in his fifth major league season. He was also looking for a new start with the National League's Pirates.

"I don't want to look back," Van Poppel told The Pittsburgh Post-Gazette, "but when I do look back, the only thing I remember is that I had fun and enjoyed myself. That's why I keep playing."

Van Poppel kept playing through 2004. By the time he was done, he'd seen time in 11 major league seasons, serving as a starter and later as a reliever. He ended with 40 career wins, 359 career appearances and a career ERA of 5.58.

Still, they weren't the numbers hoped for or expected when teams looked at the Texas high schooler and projected him as a future top starter, or even as a future Hall of Famer. He never could live up to those expectations.

Van Poppel's career began in 1990, taken by the Athletics in the first round, 14th overall, out of Martin High School in Arlington, Texas.

His career wasn't supposed to start then, though. Van Poppel told anyone who would listen that he was not turning pro. He was going to the University of Texas. That left the Braves to pass on him with the top pick and take Chipper Jones. The Athletics, though, wouldn't listen. They selected him. They also signed him.

He played his first year between short-season Southern Oregon and single-A Madison. In eight starts, he went 3-2, with a 2.15 ERA. Things got tougher in 1991. Assigned to AA Huntsville, Van Poppel posted a 3.47 ERA, and a 6-13 record.

"Todd's got a great, great arm," Oakland minor-league pitching instructor Wes Stock told The Orlando Sentinel at the start of that second season. "He's got three great pitches - the fastball, curve, and change - and his curve is a beauty. He needs time to learn more about pitching and to get everything in sync."

Van Poppel made his major league debut that September. He got one start, giving up five earned over 4.2 innings of work.

The Tigers were the team that picked him up. Then, in one solid outing, Van Poppel showed what everyone thought he could do. He threw a complete-game, five-hit shutout.

"I always felt that if I got the chance to pitch through this, I'd be OK," Van Poppel told The Associated Press after that shutout. "I had a lot to work out, and then I didn't have a chance to work on it (with Oakland)."

Van Poppel's other starts with Detroit weren't as good. He finished with nine starts and a 11.39 ERA.

Over the next three seasons, Van Poppel only made the bigs in one, in 1998 with the Rangers and Pirates. He then reinvented himself as a reliever and started to have some success.

With the Reds, in 2004, Van Poppel got 48 outings, 11 of those starts. In his second start, Van Poppel went six scoreless for the win.

"I don't put any expectations on myself," Van Poppel told MLB.com after that win. "Tonight the best thing is that we won the game. I just want to keep us in the game. It doesn't matter if I pitch one or two innings. I just want us to be in it when I leave."