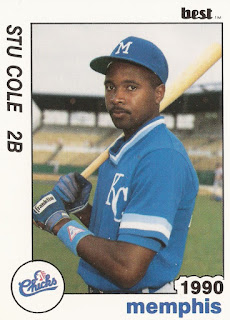 Colorado Springs manager Stu Cole had a major leaguer in 2011 who hadn't been playing up to major league standards, The Denver Post wrote.

That major leaguer was Ian Stewart and he was getting time back at AAA to hopefully straighten out his game.

"At some point it has to be an eye opener," Cole told The Post of Stewart. "It becomes time to kick it in gear, get back to where I need to be."

Cole also got to the majors as a player, but his stint was shorter than Stewart's, just nine games, getting a single hit that only coming as he couldn't get down a bunt. Cole has also now gotten his second chance at the bigs, moving up to the big club for 2013 as third base coach.

Cole's baseball career began in 1987, taken by the Royals in the third round of the draft, out of the University of North Carolina at Charlotte.

He started at short-season Eugene, hitting .305 in 63 games. In an early July game, Cole knocked in six, on two singles and a double, contributing to an 11-8 victory, according to The Eugene Register-Guard.

"I was trying not to let the pitcher get ahead of me," Cole told The Register-Guard afterward of the bases-clearing double, "just trying to make contact."

At Omaha, Cole hit .261 on the year, knocking in 39. It was enough in September to get his only call up to the bigs.

In nine appearances, Cole got nine plate appearances and seven at bats. His only big league hit came Sept. 14 against the Mariners. When his manager called on him to bunt, he tried twice and failed. He finally tried swinging away, and knocked his single to right.

Cole returned to the minors for 1992, splitting time between Omaha and Memphis. For 1993, Cole moved to the Rockies system, playing at AAA Colorado Springs. He played there for three seasons, never returning to the bigs.

By 1996, Cole had started his coaching career, serving as hitting coach with single-A Asheville in the Rockies system. After spending five years as a hitting coach, Cole moved to the manager's office, taking his first managerial job in 2001 at short-season Tri-City.

In 2006, Cole became manager at AA Tulsa, staying into 2009. In April 2009, Cole gave some last-minute information to Tulsa hitter Rex Rundgren, giving him an edge against the opposing pitcher, The Tulsa World wrote.

"Stu told me he throws sliders low and away," Rundgren told The World. "I listened to him, and it paid off."

Cole returned to manage Colorado Springs later in 2009, staying through 2012. For 2013, Cole is made his return to the majors, this time as Rockies third base coach. He continued in that role in 2015.