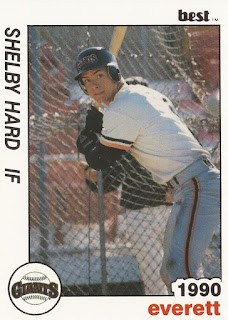 Coming up in the first inning with two on, Shelby Hart helped give his Pacifica High School a 3-0 lead in this May 1988 game.

He did so by hitting a home run, an inside-the-park home run, according to The Los Angeles Times.

From Pacifica, Hart would go on to play his college ball at Golden West College in California, and pro ball with the Giants. His eventual pro career, though, would be a brief one, lasting just three seasons, where Hart never saw above single-A.

Hart's pro career began in 1990, taken by the Giants in the 12th round, out of Golden West. His name is misspelled Shelby Hard on his Best card.

In high school, at Pacifica, Hart played both baseball and football, serving as the school's starting quarterback. In September 1987, Hart contemplated knee surgery after a football practice injury. Hart, though, came back, throwing a November touchdown.

On the Pacifica baseball field, Hart used an error to score the game-tying run in a March 1987 contest.

At Golden West, Hart hit a home run in a February 1989 game. That April, he had a pinch-hit, game-tying, ninth-inning single.

For 1992, what turned out to be Hart's final year as a pro, Hart divided time between Clinton, Everett and rookie ball. Between them, he hit .270, ending his career.