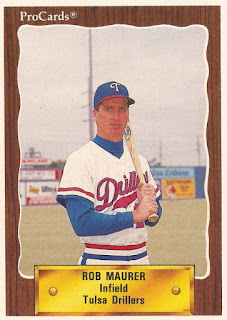 There were times in Rob Maurer's first professional season where he got upset with the way he was hitting, he told The Evansville Press in 1988.

Then someone would remind him he was still hitting .370.

"That's just the way Rob is," Rangers director of player development Marty Scott told The Press. "He's a perfectionist. When he lets his bat fly or his helmet fly, it's not anger so much as it is frustration."

Maurer, however, couldn't bring that early success with him, getting into only 21 big league games, getting three hits in 25 at bats.

Maurer's career began that year with Butte in 1988, taken by the Rangers in the sixth round of the draft, out of the University of Evansville.

Maurer made AA Tulsa in 1990, hitting .300 on the season. In 1991, Maurer made AAA Oklahoma City, and major league Texas as a September call-up.

Maurer got into 13 games for the Rangers, debuting Sept. 8. He recorded two walks in his first game, a feat that wouldn't be repeated by a Ranger in a debut until Justin Smoak did it in 2010.

Later, he recorded a two-run double Sept. 17, the only hit and only RBIs he posted in 16 at bats.

The next spring, Maurer hit a pinch-hit three-run home run in a March game. But he returned to AAA Oklahoma City for the season, rejoining the Rangers in September.

His stint with the Rangers, though, lasted just eight games. Maurer got two hits in nine at bats. They were the final eight games of his major league career, knee problems forcing him out all of 1993.