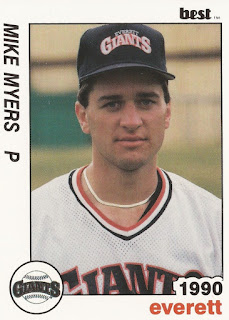 Mike Myers slipped, the log he was carrying smashed into his hand, Myers recalled to The South Florida Sun-Sentinel.

It was an injury that Myers eventually recovered from, enough to get drafted in the fourth round five months later. But the injury did have its long-term effects, even a good one, according to The Sun-Sentinel.

"(The injury) helped me with my offspeed pitch, but it hurt me as far as being a first-round pick," Myers told The Sun-Sentinel in spring 1993. "A left-hander who throws in the mid- 90s would have meant the first round instead of the fourth. It cost me some money, but it's all in the past."

That was in the past, Myers' future was definitely ahead of him. In that future lay a major league career, one that saw the reliever play in 13 total big league seasons, twice topping 80 outings in a single campaign.

Myers professional career began in 1990, with that fourth-round selection by the Giants out of Iowa State University.

He started at short-season Everett, going 4-5 in 14 starts. He stayed with the Giants just three seasons, never making it above high-A San Jose.

His big league debut came in late-April 1995, with the Marlins. He got two appearances with Florida, then, in August, he arrived in Detroit as part of a trade. Then, in September, Myers picked up his first major league win in relief.

"We've been looking for somebody like him all year," Tigers pitching coach Ralph Treuel told The Associated Press after that win. "We've needed somebody who can come in and get left-handed hitters out. If he pitches next spring like he is now, he'll find a place on this team."

Myers did make the team the next spring. He also found a new pitching style, submarine. It was a motion suggested by Tigers Hall of Famer Al Kaline, then a Tigers broadcaster. Myers took to the motion quickly, and stuck with it through the end of his career.

"I got hit hard in Minnesota, and on the plane Al Kaline sits down next to me and says, 'Kid, why don't you drop down,''' Myers told The Hartford Courant in 2006. "I'm always willing to listen to advice. Some of it I take, some of it I don't. That time, I did."

From there, Myers got into a total of 83 games as as reliever in 1996, the most of any pitcher in the American League. Myers, by then a left-handed relief specialist, did it again for 1997, getting into 88 games, also leading the league.

From 1996 through the end of his big league career in 2007, Myers never appeared in fewer than 64 games in a single season, appearing in 70 or more eight times.

In the meantime, Myers played for eight different teams, nine counting those first outings with the Marlins.

"He's very important for us," Yankees manager Joe Torre told MLB.com in 2006 as Myers appeared in 62 games for the Bombers. "That's why you sort of ignore him a lot, because there's that one situation where his name comes to mind."