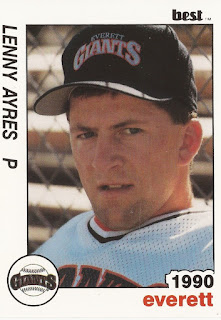 The Kennewick YMCA was taking registrations for that spring's baseball program in 2011, the draw being instruction from a former professional baseball player, Lenny Ayres.

"We start with the fundamentals and we work from there," Ayres said in announcing the program. "Giving the kids an avenue so if they want to go into that sport they have they can function in that sport."

Ayres had been functioning in that sport, and another, in one way or another for more than two decades. A two-sport star in high school, Ayres went on to a brief professional baseball career. More recently, Ayres has served as a youth coach in both baseball and football, and an instructor with his own business.

Ayres' professional career began in 1989, taken by the Giants in the 45th round, out of Kennewick High in Kennewick, Wash., and Lower Columbia Junior College.

At Kennewick High, Ayres also played quarterback on the football team. During the 1988 season, Ayres' coach praised the young QB, telling The Tri-City Herald a coach like him was lucky to have a quarterback like Ayres.

"It would be nice having a quarterback like Lenny Ayres every year," coach Ed Troxel told The Herald. "If a coach did, he would be in fat city."

On the baseball side, Ayres knocked in five over two July 1988 American Legion games. In 1989, he made an All-State baseball team.

Going into the 1991 campaign, Ayres was already pegged for the switch to starting.  In July, he threw a seven-inning complete-game. By the end of August, Ayres was the league-leader in victories, setting down 15-straight for his eighth win.

Ayres has since stayed in the games through youth sports. He's served as quarterbacks coach at Kennewick High, he offers baseball instruction through The Batters Box in Richland, Wash., and coaches youth baseball teams.

"We're hitting the ball as good, or better, than we've hit the ball," Ayres told The Herald as his team arrived at the 2009 tournament. "At this level, pitching becomes irrelevant. Nobody's throwing the ball by anybody right now.