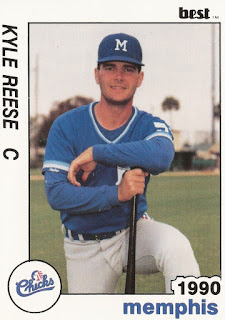 In a statement issued after his appointment, Kyle Reese said he was real excited about his new position.

"It is a great combination of competitive, challenging baseball with one of the finest Christian schools in the state," Reese said in the statement, according to The Marietta Daily Journal. "I look forward to the opportunity of leading the baseball program at MPCS."

Reese's professional career began back in 1983, taken by the Braves in the 15th round of the draft, out of North Cobb High School in Kennesaw.

After not being recorded as playing in 1985, Reese moved to the Cardinals system for 1986, playing the year at single-A Savannah and short-season Erie. Between them, Reese got into 27 games and hit .191.

He moved to the Royals system for 1987, playing at single-A Fort Myers, getting 43 games and hitting .144. For 1988, he played at single-A Virginia. At Virginia, he got into 50 games, the most games he played in any one season.

For 1989, Reese made single-A Baseball City, getting 29 games there and 15 at AA Memphis. In late-July, Reese went 1 or 3, with an RBI. It was the reserve catcher's eighth start of the year.

Moving into coaching, Reese is continuing as Mount Paran head coach into 2015.