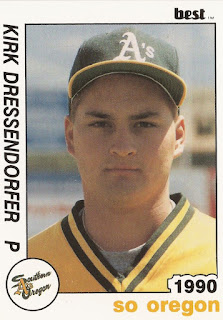 In his second major league start, Kirk Dressendorfer pitched well. In five innings, the rookie who was still less than a year removed from college gave up just two earned.

He also took the loss.

"They have a good offensive team," Dressendorfer told The Associated Press after the loss to California. "And I know if I made good pitches, I could have gotten them out. But all I can do is learn from it and use it later on.

Dressendorfer recorded 15 complete games in 1989, still a school record. He struck out 152 in 1990 and 462 in his three-season college career. He was also Baseball America's Freshman of the Year for 1988 and first-team All-American all three years, according to the 2014 Texas fact book.

His college work load, though, drew questions from some over whether he'd been worked too hard, according to The New York Times, causing a career-threatening injury to his shoulder.

With the Athletics, the team had Dressendorfer rest his shoulder the first couple months of the season. He then took the mound with short-season Southern Oregon, getting into seven games, starting four. He turned in an ERA of 2.33.

He then came back healthy in spring 1991, improbably pitching his way to the back of the Oakland rotation. Dressendorfer told The Los Angeles Times he was trying to keep everything in perspective.

"The way I look at it," Dressendorfer told The LA Times that April, "it's a lot like my freshman year in college. I'm just going to go do my job. It's not like I'm Bob Welch or Dave Stewart, expected to win 20 games."

Dressendorfer ended up starting seven games for the Athletics. He went 3-3, with a 5.45 ERA. Soon, though, that shoulder pain that limited his 1990 season came back. He returned to AAA Tacoma, but got only eight outings before surgery ended his season.

Over the next three seasons, Dressendorfer tried comebacks, but he never made it above high-A Modesto. Meanwhile, the surgeries kept coming, three in all.

"When I couldn't even lift my arm going into my second surgery, and couldn't do the normal things in life like putting on a shirt without it hurting bad, it wears on you," Dressendorfer told The San Francisco Examiner as he tried another comeback in 1995. "You see everybody else playing. It's almost like it was a different life ago that you were able to play."

That season in 1995 was actually Dressendorfer's most successful, in terms of time on the field. Between high-A Modesto and AA Huntsville, he saw 36 outings, 20 starts. In his first five professional seasons combined, Dressendorfer saw all of 36 outings, 32 starts.

In 1996, Dressendorfer turned reliever, getting into 40 games, starting one, between AA Huntsville and AAA Edmonton. Going into 1997, there was hope that Dressendorfer might just return to the bigs, according to The LA Times.

"Now, for the first time in five years, my arm feels healthy again," Dressendorfer told The LA Times with the Dodgers that spring. "It's as good as I've felt since college. I've waited a long time for this."

Dressendorfer, though, didn't make it back. Assigned to AAA Albuquerque, Dressendorfer got into only seven starts, ending his career.