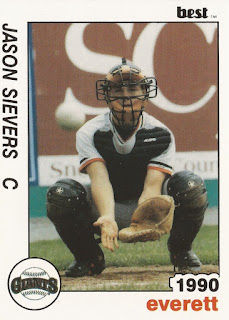 The bases were loaded and the Everett Giants were down by two. Coming up was Jason Sievers.

Sievers got on base, working a walk and pushing in a run. But it wasn't enough for the Giants, the team ultimately falling to Spokane in this August 1992 contest by a score of 3-2.

Sievers was in his third professional season that year with the short-season Giants. He ended up getting two more. Sievers, though, would never make the majors, or even to AA.

Sievers' career began in 1990, taken by the Giants in the 17th round of the draft, out of Lees Summit High School in Missouri.

Out of Lees Summit, Sievers spent his first stint with short-season Everett. The catcher got into 17 games that year, hitting just .160.

Sievers returned to Everett for his second stint in 1992. The stint, though, was as brief one, playing just 19 games on the year with another sub-.200 average.

Sievers' 1993 campaign was better, but it was again in rookie ball. With independent Butte, Sievers hit .310 over 36 games.

For 1994, Sievers moved to single-A Clinton, getting into 12 games, then to high-A High Desert, getting 42 games there. Between them, though, he hit just .141. It was his final year as a pro.