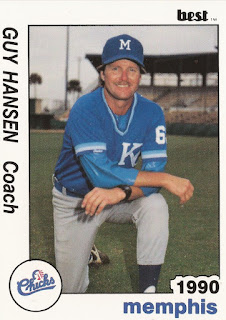 An injury kept all the other scouts away and Royals scout Guy Hansen wanted to keep it that way, he told The Los Angeles Times years later.

The young pitcher he had his eye on was a high schooler named Bret Saberhagen, a young pitcher Hansen soon pushed the Royals to draft, The Times wrote.

"Saberhagen was throwing between 85 and 88 m.p.h.," Hansen told The Times in 1986. "I didn't go back and see him the rest of the year because I didn't want anyone to know how interested I was."

Saberhagen eventually helped the Royals win a world championship. Hansen went on to spot other players as a scout, and later help those players and others take that next step to the majors, as a coach in the minors. He's even had stints in the majors himself, as both a bullpen coach and pitching coach.

Hansen's career in baseball began in 1969, drafted by the Royals in the 44th round of the draft, out of UCLA.

With the Royals as a player, Hansen's career ended up lasting just four seasons, starting at short-season Winnipeg and ending in 1972 at AA Jacksonville.

Hansen's coaching career then began, credited as serving as pitching coach at Pepperdine University in 1975, then getting his first time as a scout in 1977. He rejoined the Royals in 1981 as area scout.

Hansen stayed as a scout with the Royals through 1987, serving two seasons in the meantime as pitching coach at UCLA. It was there that Hansen spotted another prospect, and convinced the Royals to draft him, according to The Associated Press.

That player was UCLA pitcher Jeff Conine. It was Hansen who convinced Conine to give up pitching, The AP wrote.

"He thought I was loco," Hansen told The AP in July 1990 as he and Conine were reunited at AA Memphis. "But he had the straightest fastball I'd ever seen. During our drills, covering first base, I saw he had some athletic ability. In pitchers' batting practice, he hit the ball hard and put it in orbit a few times."

Hansen started back into coaching in 1986, serving as pitching coach at short-season Eugene. He moved to Memphis for 1989, staying there for 1990. In 1991, Hansen moved up to AAA Omaha. He also then moved up to Kansas City.

In 2005, he watched over a young Zack Greinke. In one June outing, Hansen and manager Buddy Bell watched Grienke give up 11 earned runs, including four earned after getting just one out in the fifth.

"I got no problem with Buddy sending him out there," Hansen told The Topeka Capital-Journal. "Normally with a young guy who gives up six, seven runs, you don't put him back out there. But he wasn't hurt physically, so we thought, 'Let's send him back out, maybe he'll have an aggressive inning to end a screwy game. Maybe things will work out.'"