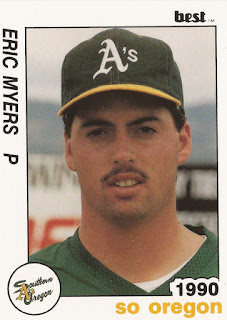 Braves prospect Evan Gattis recalled his path to the pros in 2012 and a big part of that path was his coach at Seminole Junior College, Eric Myers.

Diagnosed with depression and sent to rehab, it was Myers who called Gattis and offered him a spot on the Seminole team, Gattis told The Atlanta Journal-Constitution.

"He said, 'If you want to, it'd be a good spot for you.'" Gattis told The Journal-Constitution that February. "He kind of found people like me. He was a good molder of people. He died since then, had a brain tumor. I wish he was still around, so I could thank him."

Gattis went on to make his major league debut in 2013. His old coach Myers was a player, too. Injuries shortened Myers' career to just two seasons.

After that, though, Myers returned to his alma mater Seminole Junior College. He eventually became head coach and took his team to the 2004 juco World Series, taking third place.

It was in 2007 that Myers was felled by a brain tumor. He passed away that December at the age of 37.

Myers' own professional career began in 1990, taken by the Athletics in the 13th round of the draft out of Seminole in Oklahoma.

At Seminole, Myers went 25-2 over two seasons. In his second campaign, he went 13-0 with an ERA of 1.50, according to his ProCards card. He was also an honorable mention NJCAA All-American.

With the Athletics, Myers started at short-season Southern Oregon. In 24 relief outings, he picked up a win and five saves. His ERA came in at 2.93.

He moved to single-A Madison in 1991, getting five wins, four saves and an ERA of 4.60 over 37 outings. He also helped Madison to the division title in September, snagging a bases-loaded comebacker to end an inning in the clinching game.

His career over, Myers returned to Seminole, hired by his old coach to help the team, according to The Oklahoman. By 2002, Myers was head coach himself.

It was in 2006 that Myers started suffering from the effects of the brain tumor, according to The Oklahoman. He then lost his battle late in 2007.

The man he succeeded at Seminole and woreked under, Lloyd Simmons, told The Oklahoman after Myers' passing that what he remembered about Myers was how he finished up with his last challenge.