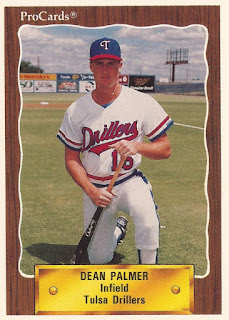 Dean Palmer started off 1992 about as hot as anyone. He hit a home run in each of his team's first three games.

To The Associated Press later that month, Palmer credited a new outlook he took late the previous year.

"I'm a different person now," Palmer told The AP. "I'm more relaxed and I'm playing my game. I'm going out there and trying to have fun and I think it shows."

Palmer ended up hitting 26 home runs for the Rangers that year and 33 the next. By the time his 14-season major league career was over, Palmer had hit 275.

Palmer's career began in 1986, taken by the Rangers in the third round of the draft out of Florida High School in Tallahassee, Fla.

Palmer started in the rookie Gulf Coast League. He made single-A Gastonia in 1987, then AA Tulsa in 1989.

Going into 1994, Palmer got praise from his manager, Kevin Kennedy.

"He's hard on himself, too hard sometimes," Kennedy told The Dallas Morning News. "But he works hard every day. He's a great guy to have on the team."

"I've had good streaks before," Palmer told The AP early that August. "But this is about as good as it gets for me."