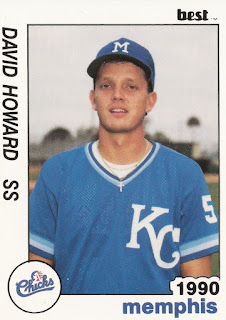 David Howard looked forward to 1994, and a better shot at the Royals big league roster, after a series of injuries and setbacks the previous two seasons, according to The Sarasota Herald-Tribune.

Those injuries and setbacks included an injury to his back, a hamstring injury, a September call-up with no room for him in the lineup. There was even a bout with Bell's Palsy that left him sidelined for a month and a half, according to The Herald-Tribune.

"As long as I stay healthy," Howard told The Herald-Tribune that March in 1994, "I think I can do a job for this team."

Howard was going into his fourth season with time in the majors that year. He went on to play in nine big league seasons, including a 1996 season where Howard was the Royals starting shortstop.

Howard's professional career began in 1986, taken by the Royals in the 32nd round, out of Manatee Community College in Florida.

"That was about a 180-foot home run," Howard told The Associated Press after the game. "It might have gone over the wall in a Little League field."

Howard finished out his major league career in 1998 and 1999, with two seasons played with the Cardinals.

To The Herald-Tribune in May 2004, Howard tried to explain his role as a hitting coach.

"It's more than, 'Hey, your elbow's dipping, or your shoulder's dipping,' '' Howard told The Herald-Tribune. "I'll never claim to have any real effect on these guys other than keeping them positive and keeping them in the right frame of mind when they go up there.''