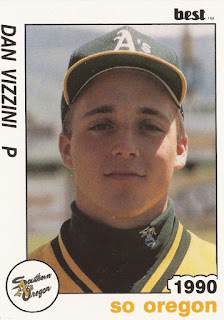 Dan Vizzini had a good year in 1990 for Francis Marion College in South Carolina, according to his ProCards card.

He went 2-1, with eight saves and a 2.42 ERA. He was named NAIA District 6 Player of the Year. He also made the NAIA All-American 1st Team.

It was a performance that caught the eye of the Oakland Athletics, who took him in the seventh round of that June's draft. It wasn't enough, however, to get him a long career. Vizzini's pro career consisted of just two years, both spent at short-season.

With the Athletics, Vizzini started at short-season Southern Oregon. In 16 relief outings, Vizzini picked up a win and a save. He gave up seven earned in 28.2 innings for a 2.20 ERA. In June, he combined with two other pitchers on a seven-hitter.

His playing career over, Vizzini has returned to the Carolinas. He is listed in 2014 as athletic director at the Charlotte Jewish Community Center. He also teaches private baseball lessons.
Posted by Steve78 at 1:00 PM