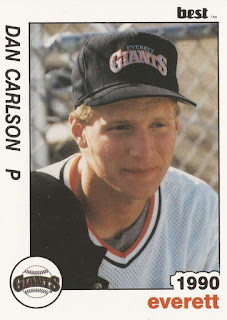 Dan Carlson was in the majors, but the right-hander wasn't getting much work, The San Francisco Examiner wrote.

Carlson, though, wasn't so sure just being there was the best thing for his career, he told The Examiner in 1997.

Carlson debuted with the Giants that year June 10. He didn't get another outing for more than two weeks. Carlson ended up getting four more outings through the end of July.

Carlson was in his second season with time in the majors that year, he would get time in two more.

Carlson's career began in 1989, taken by the Giants in the 33rd round, out of Mount Hood Community College in Oregon.

Carlson returned to Phoenix full time for 1994, then again in 1995 and 1996. Then, in September 1996, Carlson debuted in San Francisco. In five outings with the big club, Carlson gave up three earned runs in 10 innings of work. He also picked up a win.

For 1998, Carlson moved to the Devil Rays, taken as the 28th pick in the expansion draft. That spring, Carlson was just looking to get back to the majors, however the team wanted to use him.

"I've been a starter all my career in the minors but the little I've played in the big leagues, they used me in relief," Carlson told The Lakeland Ledger. "It doesn't matter to me what I do. I just want to make the club."

Carlson did make the team, as a reliever. He ended up getting 10 outings through mid-May, giving up 15 earned runs in 17.2 innings. He then played the rest of the year at AAA Durham.

Carlson then played in just one more major league campaign, in 1999, two outings with the Diamondbacks. Carlson continued playing in the minors, and briefly in Japan, for two more years, his last in 2001.

Carlson has since gone on to a long career as a coach in the minors. In 2002, he coached with the Pioneer League's Missoula Osprey. For 2013, Carlson is returning to AA Mobile, his third season with the club.

At Mobile for parts of 2011 and 2012, Carlson watched over Diamondbacks prospect Tyler Skaggs.

"He had a great mind for the game and for his stuff," Carlson told The Arizona Republic of Skaggs' 2011 campaign. "He would evaluate himself each game, each inning, sometimes realizing it was time to bury a fastball in or time to use his changeup. Everybody knows he has a great curveball but those other two pitches are good as well."

Skaggs debuted in Arizona in August 2012.