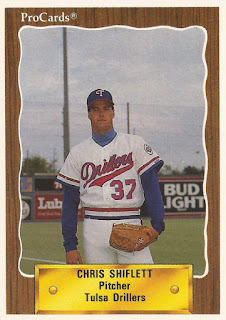 Chris Shiflett's career started with promise, according to The Los Angeles Times. But, by May 1991, that career had been slowed by injuries.

"It's very frustrating," Shiflett told The Times then. "Every time I start feeling good, it seems like there's something holding me back."

Shiflett was in his sixth pro season that year. He got into just one more. He never made AAA.

Shiflett's career began in 1986, taken by the Rangers in the first round of the January draft out of Santiago Canyon College.

Shiflett had limited time in both of his first two seasons. He got into just one game in each season. He then got into nine outings in 1988 at single-A Gastonia.

In 1989, Shiflett returned to rookie ball and got 15 outings Butte. He went 5-2 there, with a 4.24 ERA. His final win came in an outing where he had a no-hitter through five.

Shiflett made AA Tulsa for 1990 and he had early success and he told The Tulsa World that May he knew why.

"Last year in Butte (Mont.), I didn't start until June or July," Shiflett told The World. "Here, there's better defense and better hitters. The balls that got through the infield in Butte are groundouts here."