Brian Peterson, Not Unlike - 28 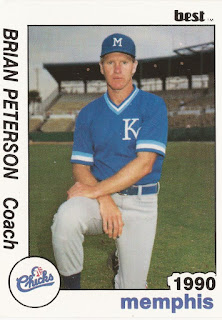 The Florida Marlins had just hoisted the World Series trophy in October 1997 and Brian Peterson could only marvel, according to The Eugene Register-Guard.

Several of the players on that team were players he'd coached in the minors. The Marlins' manager, Jim Leyland, had also been a minor league player-turned-coach like Peterson.

"That's so encouraging, because he's a guy not unlike a lot of us, who wasn't a very good player as far as major-league ability, but he'd dedicated his career to the profession," Peterson told The Register-Guard of Leyland. "And there are a lot of us like that out there. A lot of us."

By then, Peterson had been a coach for more than a decade, after a playing career where he saw time in four seasons, but never got close to the majors.

Peterson also never got close to the majors as a coach, not credited as coaching long after that 1997 season.

Peterson ended up playing in four pro seasons, each, though, separated by a season where he's not credited as playing. He played at independent short-season Victoria in 1978, then returned there for 1980. He then played his final season in 1982, at short-season Utica.

His playing days over, Peterson moved into coaching. In 1986, he served as assistant general manager for the short-season Spokane Indians.

By 1989, he was back in Eugene, serving as a coach with the Eugene Emeralds. In 1990, he became hitting coach at AA Memphis.

Peterson served two years at Memphis, before moving to the Marlins system for 1993 as pitching coach at single-A Kane County.

He stayed at Kane County for five seasons, then is credited with moving to AA Portland for 1998, though he's not credited with coaching beyond that year.

In May 1998, though, he watched over a group of young hurlers that left college for the pros, including Ryan Dempster, according to The South Florida Sun-Sentinel.

"It's hard to imagine these guys are here and they could be seniors in college," Peterson told The Sun-Sentinel. "I better not say that too loud, they might decide to enroll."