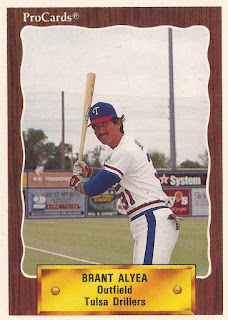 Brant Alyea recalled being nervous at the airport.

The native of Nicaragua needed to get to Canada and start his baseball career. But Nicaragua, in the middle of its revolution, discouraged players from signing pro contracts, according to Sports Illustrated.

"They kept asking me questions like, 'Why are you going ahead of your teammates?'" Alyea told the magazine. "I told them I was going to Venezuela to see my mother. Then I had to explain why my visa was only good for Mexico. I said, 'I'm getting the Venezuela visa in Mexico from my cousin,' and they believed me."

Alyea made it to Mexico City and then to Canada and the pros. If Alyea's story was limited to his escape from Nicaragua, it might still be worthy of an SI article. But Alyea's story goes further.

Alyea is the son of former major leaguer Brent Alyea. For much of the son's life, the political climate of his home country meant he didn't get to meet his father until he followed his dad's footsteps to the pros.

Alyea's pro career began in 1985, signed by the Blue Jays out of his native Nicaragua.

Alyea's story, though, begins in the winter of 1965-1966. Brant Alyea the father, with eight major league games for the Washington Senators under his belt, traveled to Nicaragua for winter ball. He dated a woman there then returned to the United States.

The son played an international tournament in Canada and caught the eye of Blue Jays scouts. In an operation detailed in Sports Illustrated, Alyea escaped his home country and started his baseball career in Medicine Hat, Alberta. In 51 games there, the outfielder hit .337.

The younger Alyea's pro career lasted six seasons. He played his second season at single-A Florence, where he made the league all-star team. He went 3 for 5 in a May game and had a .255 average overall.

He moved to single-A Miami in 1987, then single-A Gastonia in 1988 in the Rangers system. He also got into seven games at AAA Oklahoma City. He then played 1989 between the Mets and Rangers systems.

His final recorded professional time came in 1990 at AA Tulsa and in the Mexican League.

The father-son reunion didn't come until spring 1986. The elder Alyea didn't even know his son had escaped Nicaragua until seeing a list of minor league sons whose father had played in the majors, according to Baseball America.

After some initial difficulty making contact, the father drove from his home in New Jersey to spring training in Florida.

"You don't know what you're going to say until it happens," the elder Alyea told Baseball America in June 1986. "I drove up and I saw him with some friends of his. He looked a lot like me. He said, 'Brant?' I said, 'Yeah.' He really looked like I did."