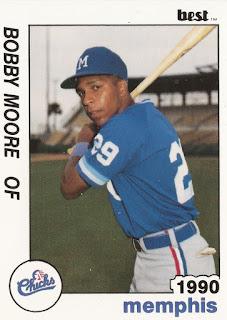 The Rome News-Tribune brought to Bobby Moore's attention in May 2006 all the players he'd seen on to the majors as a coach in the minors, players that were not only in the majors, but having success.

Moore was then in his fourth season as hitting coach for the single-A Rome Braves, a job he is returning to for 2015.

"Hearing something like that always makes me proud," Moore told The News-Tribune. "Because that's what I'm here for - to make sure these guys are prepared when they get to the next level."

Moore became a coach, helping those players to the majors, after his own playing career, one that lasted a decade and one that saw him make the majors for a single September.

Moore's career in baseball began in 1987, taken by the Royals in the 16th round of the draft out of Eastern Kentucky University.

With the big-league Royals, Moore got into 18 games, getting five hits in 14 at bats. He also stole three bases. Moore, though, never got back.

For 1992, the outfielder was traded to the Braves, playing the year at AAA Richmond. He ended up seeing time at Richmond over five-straight seasons, never seeing Atlanta.

It was finally an injury that ended his career in 1996, Moore recalled years later to The Lexington Herald-Leader.

"I ran into the outfield wall (at Rochester). The center-field wall forgot to get out of my way," Moore told The Herald-Leader. "The next thing you know, I'm waking up in the hospital. "Tried to rehab and just couldn't come back. I relied on my speed and didn't have it."

By 1999, Moore was a coach, returning to the Braves system as hitting coach at AA Greenville. Moore moved to single-A Macon for 2001, then moved with the franchise to Rome in 2003. He then stayed with Rome through 2010, then spent two years with high-A Lynchburg and is returning for 2013.

In 2004, Moore spoke with The Cedartown Standard about his job as hitting coach.

"It's all about player development," Moore told The Standard. "It's an everyday grind you have to do and you see the results."