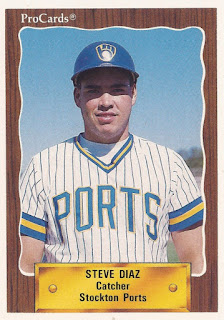 The life of a minor leaguer wasn't that glamorous, at least early in the day, Steve Diaz told The Los Angeles Times in June 1990.

The Times visited Diaz' Stockton Ports for a feature on minor league life. Diaz told of the impact game nights had on mornings.

"Not much goes on," Diaz told The Times, "especially when you sleep till noon every day."

Diaz' career began in 1988, signed by the Brewers as a free agent out of Cuesta College in California.

Diaz started with the Brewers in the rookie Arizona League. The catcher got into 27 games and hit .272.