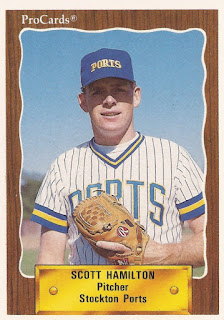 Oklahoma's Scott Hamilton returned to the mound April 1986 after an injury and he was happy to be back, he told The Oklahoman then.

His Sooners were happy to have him back for the first time since he beat rival Oklahoma State three weeks earlier. He pitched into the sixth inning on his return, giving up a single earned run and taking the win, according to The Oklahoman.

"I was tired of sitting," Hamilton told The Oklahoman afterward. "I've been in the dugout for three weeks since the OSU series. I didn't feel like I was contributing anything to the team, so I was thrilled just to be out there pitching."

Hamilton went on from Oklahoma to turn pro. He played four seasons. He never made AA.

Hamilton's career began that year, taken by the Cardinals in the 17th round of the draft out of Oklahoma.

At Oklahoma, Hamilton won All-Conference honors in 1986. He picked up 11 wins that season, still tied for ninth in a season all-time at the school.

Hamilton moved to single-A St. Petersburg for 1988. He went 8-7 there, with a 3.62 ERA. He had a poor outing that May, giving up six earned runs in the second inning of that game.

That season at St. Petersburg was Hamilton's last with the Cardinals. The Cardinals traded him to the Brewers in November.