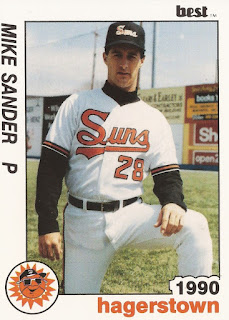 Mike Sander had some challenges as a pro, he told his hometown Allentown Morning Call. Foremost among those challenges was dealing with defeat, and trying to get himself out of it.

"I won wherever I went and always did well," Sander told The Morning Call in 1989 of his success in high school and college. "The toughest part to swallow is seeing your record go from 3-7 to 3-8 to 3-9."

Sander was then 4-9 for AA Hagerstown, The Morning Call wrote. He would eventually end up 9-10 on the season. Sander, though, would never end up in the bigs, his career ending the next season, still at AA.

Sander's pro career began in 1986, signed by the Orioles as an undrafted free agent out of the University of Alabama.

In signing with the Orioles, Sander gave up his senior season. He also started play that fall in the instructional league.

"I'm excited, what else can I say," Sander told The Morning Call that October as he left for instructional ball.

For 1989, he arrived at AA, back at Hagerstown as the AA affiliate moved there. He then turned in that 9-10 mark, with a 4.49 ERA. He picked up one of his wins in relief in an August game against Canton-Akron.

Sander returned to Hagerstown as a reliever in 1990, getting into 38 games, two starts. His ERA hit 2.48 and he picked up seven saves. But it was his final season as a pro.