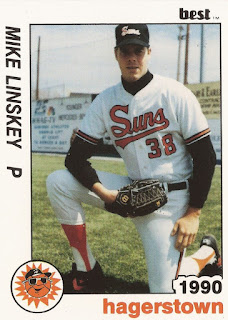 Mike Linskey started his third professional season in 1990 with AA Hagerstown. He ended the year on the Orioles' 40-man roster, The Baltimore Sun wrote, the team afraid they might have lost the prospect in the Rule V draft.

"I'm very excited about this," the Baltimore native Linskey told The Sun. "It's one of the goals I set for myself this off-season. It's really exciting because I'll actually be working with the big-league team."

Linskey's pro career began in 1988, taken by the Orioles in the ninth round, out of James Madison University in Virginia. Linskey went to James Madison out of Loyola High School in Baltimore.

With the Orioles, the left-hander started at short-season Erie. He moved to single-A Frederick and AA Hagerstown in 1989, going 12-8 between them in 28 starts.

For 1990, Linskey returned to Hagerstown, going 7-1 in eight outings, seven starts, posting a 1.47 ERA. He then moved up to AAA Rochester, getting 18 starts there, going 7-9. He also then made the 40-man roster that winter.

For 1991, Linskey split time again between Hagerstown and Rochester. That spring, he also suffered a back injury, starting the year 1-5 at Rochester, The Sun wrote later. He didn't pick up his first win until late May.

"He was pressing," Linskey's manager Greg Biagini told The Sun after that first win. "You can't get anything accomplished when you're pressing."

By the next spring, Linskey was with a new organization, the Padres, taken off waivers. Padres assistant general manager John Barr told The Sun the Padres were ready to give Linskey a chance.

"We'll take a good look at Mike in the spring and decide where to use him," Barr told The Sun. "We don't like to discourage or rush a player. We like to bring 'em up here when they're ready to stay."

Linskey, though, ended up playing the year at AA Wichita. He played the next year at AAA Las Vegas, his last year as a pro. He never made San Diego, or the bigs.

Since his retirement, Linskey has gone on to be a community center supervisor, rec league coach and, most recently, run his own youth baseball program in Texas, Houston Humble Youth Baseball.