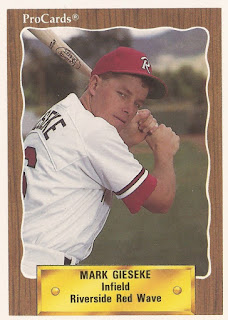 Mark Gieseke got notice from scouts in 1988 just by going to work, his summer league manager told The Los Angeles Times that July.

"He doesn't do anything fancy or spectacular," San Fernando Valley Dodger Manager Mark Morton told The Times. "He's just a guy who at the end of the day has three hits and three RBIs."

Gieseke's career began in 1989, taken by the Padres in the 35th round of the draft out of Cal State-Sacramento.

Gieseke started with the Padres at short-season Spokane. His stay there was brief. He got into three games before moving up to single-A Waterloo. He hit .289 over 42 total games on the year.

"I liked Spokane," Gieseke told the Times shortly after moving to Waterloo. "but I'm not gonna complain about getting moved up."

Gieseke moved to high-A Riverside for 1990. He also got five games at AAA Las Vegas. He hit .268, with four home runs overall.