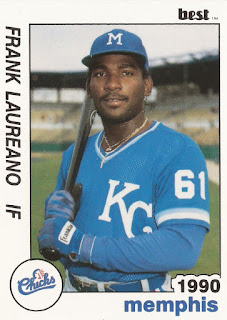 Frank Laureano had a singular goal in 1987, playing for the single-A Appleton Foxes, The Appleton Post-Crescent wrote that July.

And he was doing his best to reach that goal, The Post-Crescent wrote, hitting .319 and knocking in 60 by late that month.

"I want to make the big leagues," Laureano told The Post-Crescent. "That's all I want to do."

Laureano, eventually seen by one account as "the heir to Royals second baseman Frank White," went on to play in six affiliated seasons. But he never fulfilled his goal, or that promise. He made it to AAA, but no higher.

Laureano's career began with the Royals in 1985, signed as an undrafted teenager out of his native Dominican Republic.

After a year at single-A Virginia and Baseball City in 1988, where he hit just .222 between them, Laureano played at Baseball City full time in 1989. He also made the Florida State League All-Star team.

On the year in 1989, Laureano hit .260, with 66 RBIs and swiped 25 bases. In late-May, Laureano knocked a two-run double. In June, it was The Newport News Daily Press that compared Laureano to White. Laureano then was hitting .263, with 22 RBIs.

He played 1991 mostly back at Memphis, but he did get six-games at AAA Omaha. In those six games, he went 3 for 19. They were also his only games at AAA, his his career ending without making the bigs.