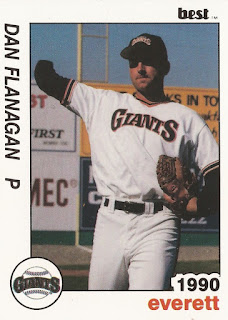 Dan Flanagan came on in the eighth inning for Virginia Commonwealth University. If he stayed on, and held the lead, Flanagan was in line for his first save of the 1990 college campaign.

Flanagan did stay on, pitching two scoreless innings. The scoreless outing also marked his sixth-straight where he didn't give up a run, 13.1 innings in all, according to The Newport News Daily Press.

Flanagan went on to get more saves, as a pro. Flanagan, though, wouldn't get them for long, his professional career lasting just three seasons, never making it to AA.

Flanagan's professional career began that June, taken by the Giants in the 21st round of the draft out of VCU.

With VCU, Flanagan posted a 2.62 ERA over his four-year career at the school, still the school's third best career mark.

With the Giants, Flanagan began at short-season Everett, getting into four games there and picking up two saves, before moving on to single-A Clinton. At Clinton, Flanagan got into 25 contests, picking up three saves there.

For 1991, Flanagan returned to Clinton, getting into 44 games that year. He posted a 2.09 ERA on the campaign, earning three saves.

Flanagan has since returned to Virginia, currently listed as a director with a business consulting firm.