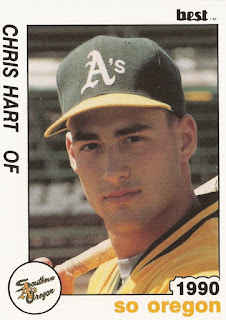 Jacksonville starter Derek Lowe had a bad outing in this 1994 game and Huntsville hitter Chris Hart had a good one.

Hart's AA Stars hung seven runs on the future major leaguer Lowe in the first inning. Three of those came on a Hart home run.

Lowe went on from that game to have himself a long major league career. Hart went on to play just two more years. He never made AAA.

Hart's career began in 1990, taken by the Athletics in the fifth round out of Auburn University.

At Auburn, Hart helped his team to the 1989 conference title with a lead-off home run. On the season, Hart picked up 62 hits, tying Frank Thomas for the team lead.

Hart started his pro career at short-season Southern Oregon. He hit .264 in 67 games. He beat a throw home to score in a June game.

He played an abbreviated 1991 season of 46 games between Southern Oregon and high-A Modesto. He then returned to Modesto for all of 1992.

Hart played two more seasons with Huntsville, hitting .233 in 1994 and .262 in 1995. He played in just 36 games in 1995. He knocked in three runs in an April game and four in another one. But it was his final season with the Athletics system. Hart went to independent ball for one final season, ending his career.