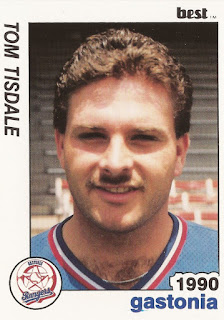 Tom Tisdale started his training career in pro baseball with the Rangers in 1989 at rookie Butte and he went on to a career in baseball that spanned nearly two decades.

In 2005, he was recognized for his work. Tisdale, then serving as trainer at AAA Durham, was named International League Trainer of the Year.

Tisdale started his career out of California Lutheran University. He served there as an assistant trainer for two years, according to his Best card. He later received his masters from California University of Pennsylvania.

After joining the Rangers at Butte in 1989, Tisdale moved on to single-A Gastonia in 1990. Early on that year, he and his team were met by tragedy as Gastonia pitcher Ronaldo Romero collapsed during a game and later died of an enlarged heart.

Tisdale went on to serve time in the Pirates and Rays organizations as a trainer. He also worked with players for Salisbury University and Western Carolina University.

Tisdale's 19th season as a pro baseball trainer came in 2006 with the Rays at AAA Durham. It was his ninth season in the Rays system and fourth with Durham.

After the Rays, Tisdale moved back to Western Carolina. He also moved to basketball, serving as the trainer for the men's team through 2010, according to Carolina West Sports Medicine.