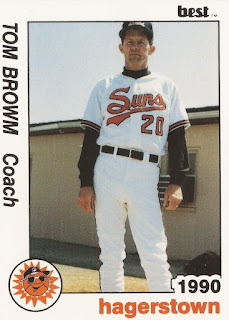 McDonald eventually did play ball, doing so in the majors for nine seasons. And Brown has gone on to continue to coach in the minors, helping others get to the majors for more than two decades, continuing into 2013 as pitching coach at AA Pensacola.

Brown's career began in 1971, signed by the Royals as an undrafted free agent out of the University of Louisiana-Monroe. (Brown's name is spelled Tom Brown, not Tom Browm, as it's spelled on his Best card.)

"I am where I am today because of him," Cueto told MLB.com of Brown. "He was a pitching coach, but he was like my baseball father. You want a coach that will treat you that way and is not yelling at you all the time. He makes you listen because he has the right approach. This is hard sport and you have to get the best you can. He got the best out of me."