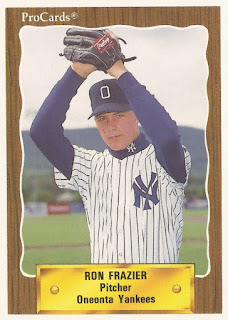 The Albany-Colonie Yankees' backs were against the wall in the 1993 postseason and Ron Frazier came through, according to The Schenectady Daily Gazette.

Down 2-0, Frazier came out and gave the club seven innings of work. He gave up one run and struck out 11 as Albany stayed alive with a 3-1 win.

"He's a big-game pitcher and he pitched a big game for us," Albany pitching coach Dave Schuler told The Daily Gazette afterward. "He wanted the ball. He likes the scenario of the big game and he showed it tonight."

Frazier ended up getting the ball a lot. He went on to a career that spanned 13 seasons in the minors and independent ball. Frazier made it up to AAA, but he never made the majors.

Frazier's career began in 1990, taken by the Yankees in the 12th round of the draft out of Clemson University.

Frazier first made AA Albany in 1993, where he had a 3.84 ERA over 12 starts. He struck out nine in his second start there that July, giving up one earned.

"I've always liked him," Schuler told The Daily Gazette after that game. "It seems he gets stronger as the game progresses. You don't find many starters like that anymore."

Frazier then got his first look at AAA in 1994, getting 20 outings, 17 starts at Columbus. He had a 5.11 ERA. He returned to Columbus for 24 more outings in 1995, but it marked the end of his Yankees organizational career.

He played one more season of minor league ball, seeing time at AA and AAA with the Reds in 1996. He then moved to independent ball, getting three seasons in at independent Waterbury and then two at Bridgeport.

Frazier picked up a win for Waterbury in August 1997, part of an overall 12-4 record with the club. He struck out five in that victory, his 11th on the year, according to The Bangor Daily News.

"I had a little trouble hitting the outside corner and down at the knees," Frazier told The Daily News, "so I went with the two-seemer and fortunately, they hit the ball to our guys out there."