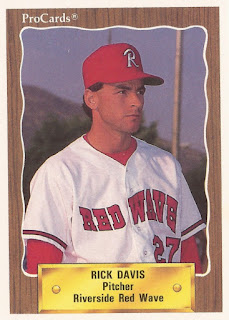 The Padres seemed to have an opening for a reliever in San Diego in 1992, at least temporarily, but Rick Davis couldn't go. Shoulder tendinitis prevented the AAA reliever from going, according to The Los Angeles Times.

"I always keep the mentality that I'll get called up," Davis told The Times. "I've moved up every year. I don't feel any pressure to prove myself. I'm very happy with the organization."

Despite his optimism, Davis didn't get his call that year or ever. He spoke to The Times in his fourth pro season. He got into just one more, never making the majors.

Davis' career began in 1989, taken by the Padres in the seventh round of the draft out of Cal State Dominguez Hills.

At Dominguez Hills, Davis dazzled hitters with three pitches, including his best pitch, the knuckle curve.

"The pitch comes easy to me," Davis told The Times in April 1989 of his knuckle curve. "But some guys just can't throw it."

Davis still owns the school's record for most complete games, 11 that year, and strikeouts, 171.

With the Padres, Davis started at short-season Spokane. He went 9-2 on the year, with a 1.35 ERA and 106 strikeouts. He had a complete-game win in July where he struck out 10.

"I felt I could challenge the hitters with my pitches, and I felt confident," Davis told The Eugene Register-Guard after that game.