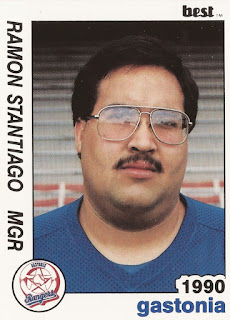 Ramon Santiago had a little more equipment to keep track of in-season that off-season in 1990, according to his Best card.

In-season, he served as the equipment manager for the single-A Gastonia Rangers, keeping track of all the team's equipment.

In the off-season, though, Santiago's duties turned to basketball, according to his Best card. Santiago served as equipment manager for the NBA's Charlotte Hornets.

That 1990 season was Santiago's third season as an equipment manager in the Rangers system. By then, he had his degree from Belmont Abbey College in North Carolina.

Santiago went on to move to the Cubs and AA Charlotte for 1991, serving as equipment manager there. He continued with Charlotte through 1994, staying after the team changed affiliations to the Indians, according to his LinkedIn profile. Along the way he also served as an athletic trainer.

He's since left equipment managing endeavors and moved on to other pursuits, according to his profile.