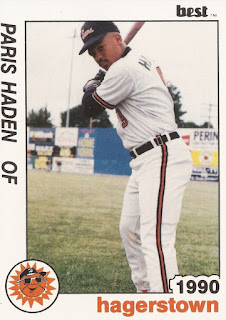 Having just swept the regional that August, Hayden, coach of DeLand's Post 6 squad, could only marvel to The Orlando Sentinel at his team's success.

"The baseball gods are smiling on us," Hayden told The Sentinel. "You hear everybody say this, but this has been a complete team effort. Everybody came through in one or another."

Hayden spoke having had the baseball gods smile on him long enough to have a professional career that lasted five seasons, getting him as high AA. But those baseball gods couldn't get him to the majors.

Hayden's professional career began in 1986, taken by the Orioles in the first round of the June secondary draft, out of Indian River Community College. Hayden has also been credited as Paris Haden.

Hayden went on to return to his hometown of DeLand, coaching his local American Legion team, coaching his team to that 2004 World Series appearance.

On DeLand's 2004 run, they getting past Spartanburg to win a birth in the regional finals. Hayden told The Spartanburg Herald-Journal how fortunate his team was to be there. That second chance came after his team came in fourth in the state tournament, but the teams above them couldn't go to the regionals.

"We've come from not even being supposed to be here, to being in the finals," Hayden told The Herald-Journal. "I told them before we left Florida to make the best of it because this situation only comes up once in a lifetime."