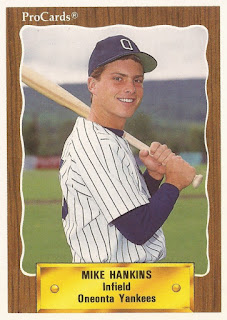 After four seasons in the minors, Mike Hankins tried his hand in 1994 at extending his career in independent ball.

The Winnipeg Goldeye infielder also had himself a good time, he told The Los Angeles Times that July.

"I think I've had some good years," Hankins told The Times. "It's a little different (in Winnipeg). I'm having a lot more fun, and having fun has helped me play better."

That season ended up being Hankins' last as a pro. He's since gone on to a career helping others play better as a high school and college coach.

Hankins' career began in 1990, taken by the Yankees in the 32nd round out of UCLA. Hankins' father Terry Hankins also played in the minors.

Hankins started with the Yannkees at short-season Oneonta. He hit .271 in 50 games. He moved to high-A Prince William for 1991, hitting .263 there. He picked up three hits in a July game. He singled and scored in an August game.

He split 1992 between Prince William and high-A Fort Lauderdale. He also saw seven games that year at AAA Columbus. He hit .287 overall.

Hankins' final season with the Yankees came in 1993 at AA Albany-Colonie. He hit .223 in 63 games, including a 2-for-3 game in June. Hankins then moved to independent Winnipeg for 1994, hitting .320 and finishing out his career.

Hankins later took over the reins of the Lincoln High School in California and served as a baseball instructor. He stayed with the Lincoln program until 2006.

In 2014, Hankins took over the fledgling program at William Jessup University. He also continued to serve as a high school physical education teacher. The school's program itself was founded by former major league manager Jerry Manuel, according to The Sacramento Bee.

"He's young enough to take the bumps and bruises that come with being a new program," Manuel told The Bee of Hankins in January 2015. "He's got a great baseball background, and you’ve got to like his values. He’s going to do an awesome job."