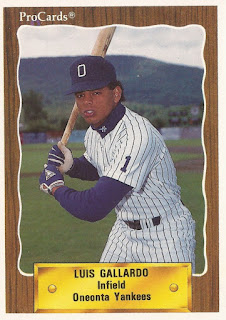 The Fort Lauderdale Yankees amassed a whopping 18 hits in this May 1992 game and Luis Gallardo was in the middle of it.

Gallardo picked up three hits in the game, one of four Yankees to do so. The club went on to beat Miami by a score of 11-2, according to The South Florida Sun-Sentinel.

Gallardo's career began in 1987, signed by the Angels as a free agent out of his native Venezuela.

Gallardo played his first season between single-A Quad City and short-season Salem. He hit .233 between them, playing largely as an infielder.

Gallardo signed with the Yankees for 1990 and went to short-season Oneonta. He also tried a new position, serving as catcher over 28 of his 40 appearances. He hit .284.