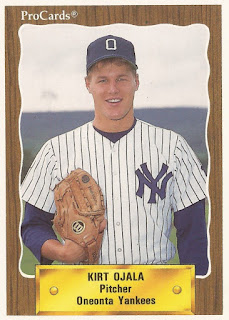 At a time when Mark McGwire could seemingly hit anyone, he couldn't seem to hit Kirt Ojala.

The left-hander faced McGwire nine times in his career up until August 1998 - six times that record-breaking season - and Ojala held the slugger hitless.

"No, I can't say I'm the guy he can't hit," Ojala told reporters after facing McGwire and the Cardinals that Aug. 31, according to The Los Angeles Times. "So far he hasn't hit me, but it's far too soon to say it's a trend. I hope I'm around long enough to get other opportunities. He might go four for four the next time."

Days before facing McGwire in that August 1998 contest, Ojala faced another slugger but didn't have the same luck. He gave up Barry Bonds' milestone 400th career home run.

Ojala's career began in 1990, taken by the Yankees in the fourth round of the draft out of the University of Michigan.

Ojala went 12-8, with a 3.62 ERA for Albany that year. He received praise after a June start where he continued a string of 17-straight shutout innings, according to The Schenectady Daily Gazette.

Ojala made AAA Columbus in 1993. He went 8-9, with a 5.50 ERA. He stayed at Columbus three seasons without seeing the Bronx. He then played a season with the Reds at Indianapolis.

In 1997, Ojala arrived with the Marlins. He also made his major league debut that August. Ojala got into seven games down the stretch, starting five. He gave up 10 earned in 28.2 innings.

Going into 1998, Ojala believed his prior year run would be his ticket back, according to The South Florida Sun-Sentinel.

"I think that's a huge plus in my corner," Ojala told The Sun-Sentinel. "They know what to expect out of me. They don't have to say, `When is he going to start throwing 95 mph?' They know I'm going to get people out with offspeed stuff and throw strikes."

About halfway through the 1998 season, Ojala started regularly using a new pitch, according to The Associated Press. He started throwing a knuckleball.