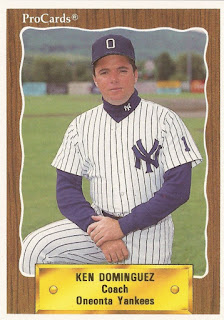 Ken Dominguez' University of Tampa team made the 1987 Division 2 World Series but the team's goals had yet to be met, Dominguez told The Lakeland Ledger that May.

"We had three goals to start the season - to win the Sunshine State Conference title, win the regional and win the national title," Dominguez told The Ledger.

Dominguez' team fell short of the national title, coming in sixth in that world series. Dominguez' own goals soon changed.

The next year, he made the jump from college to the pros. His pro career has lasted more than two decades, Dominguez working to fulfill the ultimate goal of getting his players on to the majors.

Dominguez started coaching with the Yankees in the rookie Gulf Coast League. he moved to short-season Oneonta in 1990. Before the decade was out, Dominguez had at least five more seasons in the GCL.

In 1998, Dominguez watched over a young Dominican named Ricardo Aramboles. Aramboles gave up three earned in four innings in his GCL debut.

"I wouldn't call it a bad outing," Dominguez told The Orlando Sentinel after that game. "For his potential, I would say it was fair. He wasn't pleased, but it wasn't like somebody shot his dog."