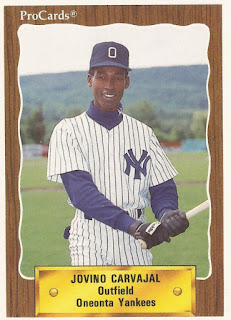 Jovino Carvajal was speedy. He stole over 30 bases in four separate seasons. In one season at single-A, Carvajal stole 68.

"Mo just had [elbow] surgery, so he wasn't doing a lot of throwing," Yankee Jorge Posada recalled to Sports Illustrated upon Rivera's retirement in 2013. "But there he was running with the outfielders, right there with (Carl) Everett and (Jovino) Carvajal, the fastest guys in the Instructional League. I thought he was an outfielder the first time I saw him."

Carvajal was an outfielder for a decade as a pro. While Rivera and Everett went on to stardom in the majors, Carvajal went on to make AAA, but he couldn't make it higher.

Carvajal's career began in 1990, signed by the Yankees as a free agent out of his native Dominican Republic.

Carvajal started with the Yankees at short-season Oneonta. He hit .287 in 52 games, stealing 15 bases. He moved to high-A Fort Lauderdale. He stole 33 games that year, but his average dropped to .231.

In another May game, it was Carvajal's decision making that gained notice. The outfielder threw home twice early in the contest, missing the runners both times. The throws also put other runners in scoring position, The Lakeland Ledger wrote.

"In the first third of the game, if you're going home with the throw, you better be real sure you're going to get the guy," Lakeland manager John Lipon told The Ledger.

Carvajal moved to the Angels system for 1994, playing the year at single-A Cedar Rapids. He posted a career-high 68 stolen bases and hit .292.