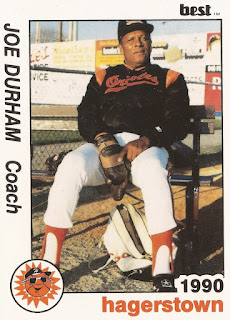 Signed by the St. Louis Browns in 1952, Joe Durham played his first year in one of the final years on the Negro Leagues for lack of farm system space, according to The Baltimore Sun.

The next year, the future major leaguer and longtime coach and scout moved to the Browns' system and the Browns' team in the old Class B Piedmont League, a league that was predominantly in the South.

Even then, though, six years after the major leagues were integrated, the minors, especially in the South, were still far from accepting, Durham recalled years later to The Hagerstown Herald-Mail while at an African American festival in nearby West Virginia.

"They were rough, some of the cities," Durham told The Herald-Mail at the 2008 festival. "As an outfielder, I was 20 feet from the white stands most of the time. They could be tough. But to see people out and happy and positive like this, it does me good."

From those starts, Durham went on to make the majors after the franchise's move to Baltimore in 1954. He also became the first black Oriole to hit a home run after the move.

Since his playing career, Durham went on to be a coached, scouted and served as a front office official, according to The Sun.

Durham's career began that year in 1952, signed by the Browns out of Huntington High School and Shaw University.

Durham first made the majors just two years after he signed, in September 1954. He also started off hot, getting at least one hit in each of his first five games.

Durham ended up getting into 10 games, hitting .225. Then he entered the Army, missing the next two seasons. Back in baseball for 1957, Durham got into 77 games for the Orioles, hitting .185. His final big league time came in 1959, with the Cardinals, six games with five hitless at bats.

Durham, though, continued playing in the minors through 1964. Durham went on to several positions with the Orioles, including taking the post of community coordinator for baseball operations in 1987, according to The Sun.

Durham then turned to coaching, coaching at AA Hagerstown in 1990. He was still with the Orioles system in 1995. But he never made the majors as a coach.

In 2008, Durham helped out with a youth baseball clinic, telling MLB.com children needed to learn the right way to play the game, including calling for fly balls with their hands.