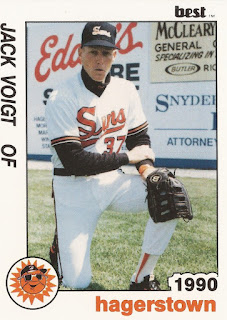 Moved up to AAA Rochester in 1991, Jack Voigt's stay was supposed to be brief, his hometown Sarasota Herald-Tribune wrote.

Instead, he started to hit, and earned himself a more permanent chance to make it to the next promotion, to the majors, according to The Herald-Tribune.

"I feel like I'm having a pretty solid year," Voigt told The Herald-Tribune. "I think I've shown some people that I can handle this level of play."

Voigt wouldn't take that next step until the next season, and then only for a game. But Voigt eventually would show that he could handle a major league level of play. Before his career was out, Voigt would see time in a total of seven big league campaigns, 294 contests.

Voigt's professional career began in 1987, taken by the Orioles in the ninth round of the draft, out of Louisiana State University. Voigt went to LSU out of Venice High School in Florida. With LSU, Voigt helped the team to the 1987 College World Series.

It was in 1992 that Voigt got his first call to Baltimore. That August, he got into a single game for the Orioles, without getting a plate appearance.

He then returned to Baltimore in 1993, getting into 64 games, hitting .296. He played mostly in the outfield, but also got time at first and third, as well as DH.

That August, Voigt recalled to The Baltimore Sun his conversation with Baltimore manager Johnny Oates after Oates informed Voigt he was headed back to AAA.

"He told me to go down and work hard and be ready," Voigt told The Sun. "And the last thing I said to him going out was, 'Thanks very much for the chance, and I will be back.' And he looked at me and said, 'I know you will.' "

After a 1996 campaign where he saw just five games with the Rangers, Voigt returned to the majors with Milwaukee in 1997 and Oakland in 1998, getting into 72 games and 57 games, rounding out his big league career.

Along the way, Voigt continued playing multiple positions, including each outfield slot and the corners of the infield. In October 1993, Voigt credited his willingness to do what was needed with getting him to the majors, according to The Herald-Tribune.

"The main thing for me was that I had to take advantage of every opportunity," Voigt told The Herald-Tribune. "I was intent on contributing in whatever role they used me for."

His major league time done, Voigt continued playing in the minors into 2000. That final year, Voigt also became a hitting coach for AAA Oklahoma. He has continued in baseball since, serving as a coach and manager in the minors, as well as a scout. For 2013, Voigt is serving with the Mets as minor league outfielder and baserunning coordinator.