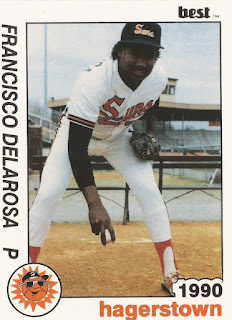 The Orioles bullpen needed some relief and Francisco de la Rosa was the called up to fill the gap, according to The Baltimore Sun.

The move didn't go as intended for the Orioles, or de la Rosa. It got de la Rosa to the majors. But back problems would limit his appearances to two, what would turn out to be the the only two appearances of his major league career.

De la Rosa began his career with the Blue Jays system, signed as a free agent out of his native Dominican Republic. He played part of one season for the Blue Jays' rookie league team, with a 5.52 ERA, and was released.

It wasn't until late 1987 that de la Rosa caught on with the Orioles, playing 1988 at single-A Hagerstown. He returned to single-A Frederick in 1988, while posting a 2.38 ERA and getting promoted back to AA Hagerstown. In 18 appearances at AA, de la Rosa's ERA expanded to 4.55. Among his problems was a three-run double given up in August against Albany.

De la Rosa returned to Hagerstown for 1990, bettering his ERA to a more-than-acceptable 2.05, and getting a taste of AAA Rochester. He also got a look at starting. In one July game, de la Rosa threw a complete-game, three-hitter, according to the Reading Eagle.

Back to mainly relief for 1991, de la Rosa spent the year at Rochester and had a still-good 2.67 ERA. Then he got the September call-up.

De la Rosa debuted with the Orioles Sept. 7. In 1.1 innings, he gave up two hits and one walk. Then his back got sore, suffering spasms after his debut, according to The Sun.

His back was well enough by October to get back in a game. That game came Oct. 3 and it didn't go well. He pitched in another 2.2 innings, de la Rosa gave up four hits and two earned runs in a blow-out loss to the Yankees.

Whatever de la Rosa did in that outing, the Yankees saw something, other than extra runs. By the start of the 1992 season, the Yankees traded for him. As he went, de la Rosa gave up five runs in one inning of an Orioles intersquad game.

De la Rosa spent the next two seasons at AAA Columbus. In spring 1993, his spring training was delayed with visa problems, according to the South Florida Sun-Sentinel.

De la Rosa signed on with the Cardinals for 1995, playing at AAA Louisville. His career ended in 1996, with four appearances with the independent Northern League.

De la Rosa, though, passed away in January 2011 after several years of failing health. He was 44.