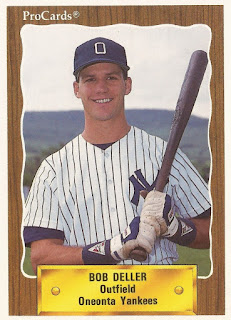 It wasn't the biggest hit in this May 1993 game for high-A Prince William, but Bob Deller got the job done.

Deller came up in the seventh with teammate Jorge Posada on third. He knocked what was scored as a fielder's choice, sending Posada home. That run put Prince William ahead for good, according to The Fredericksberg Free Lance-Star.

Deller's career began in 1990, taken by the Yankees in the 18th round out of Texas Wesleyan University.

Deller made it to high-A Fort Lauderdale for 1992. He picked up three hits in one May game. He hit .254 overall.