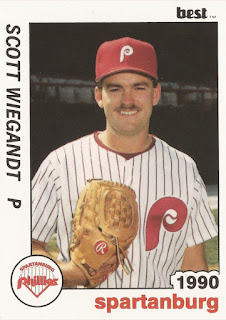 Not only was Scott Wiegandt hardly 15 years from his stint in college when he took the Bellarmine University athletic director post in 2004, but he also had the all-important knowledge that came from once being an athlete at the same school.

The former left-handed pitcher cited that prior knowledge as an asset in a 2006 interview with The Louisville Business Journal.

"I'm not too far removed from being in their shoes," Wiegandt told The Business Journal then. "I understand what it takes to balance that hectic academic-athletic-social life in college. I think I know how to push them in the right way. The relationships that I have with our student-athletes are what I enjoy most."

Wiegandt returned to Bellarmine, a job he continues in for 2012, after a decade-long professional career that took him up to AAA for parts of six seasons, but never took him to the majors.

Wiegandt's professional career began in 1989, taken in the 45th round of the draft by the Phillies out of Bellarmine in Louisville.

With the Phillies, Wiegandt started at rookie Martinsville, going 2-5, with a 2.56 ERA in nine starts.

Wiegandt moved to single-A Spartanburg and high-A Clearwater for 1990, posting a 2.31 ERA between them in 43 mostly relief outings. His Spartanburg time consisted of 10 outings and a 0.98 ERA. He went two scoreless relief innings in one April Spartanburg win.

For 1991, Wiegandt made his first stop at AA, at Reading, spending most of the season there. He also spent most of 1992 there, getting a one-game look at AAA Scranton. He also picked up six wins at Reading, his sixth coming in mid-August.

It was Reading again in 1993, with 56 relief outings and a 3.56 ERA and another six wins, his sixth again coming in August.

Wiegandt didn't make AAA full time until 1995, getting 47 outings at Scranton. He returned there for another 46 outings in 1996. Each year, Wiegandt posted an ERA below 3, but he never saw Philadelphia. That second year in Scranton was also his last in the Phillies system

For 1997, Wiegandt returned to Louisville, with the AAA Redbirds and the Cardinals. His final pro year came in 1998, with 11 outings with the Pirates at AAA Nashville.

"It is with a great deal of enthusiasm and pride that I take hold of this opportunity for me to work as a professional in the place where I grew up," Wiegandt said in Bellarmine statement announcing his hiring as AD in June 2004. "Having internal knowledge of Bellarmine and its pursuit of excellence, I feel that Bellarmine's athletic programs are headed in the right direction."