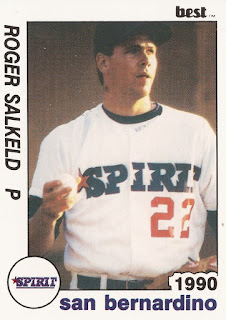 Roger Salkeld took advantage of his status when he was drafted, he told The Los Angeles Times years after the event.

Salkeld was taken third overall by the Mariners in 1989. He even got a bigger bonus than the Mariners' first-overall pick a year earlier, Ken Griffey Jr.

But, unlike the Mariners' 1988 pick, their 1989 top pick ended up having a much harder road than anyone expected.

"I thought it was just a matter of putting in my time and I'd be in the big leagues and that's not how it works," Salkeld told The Times in 1996. He adding a short time later, "this is my job and you've got to battle the whole way here. It's not hard to get to the big leagues. It's hard to stay."

Salkeld battled through injury and disappointment, finally making the majors with Seattle for three appearances in 1993. But the one-time highly-touted pick's big league career ended just three years later, with 19 starts and 29 overall appearances with the Reds.

That year with the Reds, Salkeld beat one team who hardly knew who he was.

The initial expectations began in 1989 with the Mariners third overall pick, Seattle taking the Saugus High 18-year-old and assigning him to short-season Bellingham.

But before the right-hander could start, he had to sign. He finally did in early July, taking with him a bonus of $225,000. By comparison, Griffey's bonus a year earlier was $160,000, The Times wrote.

"We're very pleased to sign him and to have him in the organization at such a young age," Seattle public relations director Dave Aust told The Times after Salkeld signed. "He should move through the organization quickly and make the major leagues. He was in the clubhouse last night and he was pretty wide-eyed."

Then came the injuries. Shoulder soreness caused him to miss all of 1992. That led to shoulder surgery in October and the prospect of missing all of 1993, as well. Salkeld, though, made it back to the mound by June 1993, starting at AA Jacksonville.

"Anybody who has surgery like Roger had usually takes 18 months to come back," Mariner farm director Jim Beattie told The Times in June. "He's a strong kid and he's come back quickly. We're surprised but still cautious. With this type of injury it's a matter of remaining healthy."

By September, Salkeld was in the majors. In three outings, two starts with Seattle, Salkeld went 14.1 innings while giving up four earned runs.

He returned to Seattle for 1994, getting another 13 starts, and his first two big league wins. His first win came April 28, a 6.2-inning performance where Salkeld gave up two hits and no runs. "Finally getting the win is a big weight off my shoulders," Salkeld told the Associated Press after that game.

Salkeld started 1995 back at AAA. He was also soon traded. In May, the Mariners sent him to the Reds in exchange for Tim Belcher. Salkeld was promptly sent to AAA Indianapolis.

After the trade, though, Salkeld spoke to The Times about his struggles, and the lessons he'd learned during his time as a professional.

"I have a whole new respect for the game," Salkeld told The Times that July. "I've learned that nothing's gonna be handed to you in this game. You have to earn every last bit of it."

Salkeld didn't make it back to the majors until 1996. Then, he had the best of his three big-league seasons.

But, on June 16, Salkeld was almost unhittable. Against the Expos, Salkeld threw a complete game shutout, giving up just four hits. It was against a team who hardly knew who Salkeld was, much less that he was once a third overall pick.

"Today I faced a really tough battler," opposing starter Rheal Cormier told The Associated Press afterward. "Salkafeel, I think his name is, pitched a real good game. We couldn't get to him all game."


After his time in Cincinnati that year, Salkeld returned to the minors. He also hoped for one more shot at the majors. He played at AAA Indianapolis for 1997, then with the Astros at AAA New Orleans in 1998. In 1999, he signed with the Marlins at AAA Calgary. He'd also played in Mexico.

"I'm getting to the point in my career where I need to do things to get me back to the big leagues," Salkeld told The Times in 1999. Salkeld, though, couldn't make it back. His career ended in 2000, with one more brief shot with the Indians at AA Akron.