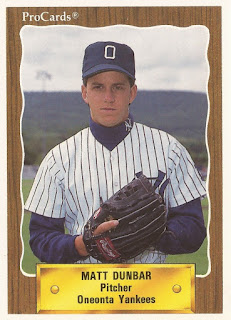 Matt Dunbar came on in relief of the Marlins starter in this May 1995 game and he couldn't get the job done.

Dunbar allowed both runners on base when he came in to score. He was also tagged for two runs himself. A 2-1 deficit had become 6-1.

"I don't know what to say," Dunbar told The South Florida Sun Sentinel after the 9-1 loss. "I'm just so disappointed. You don't want to get beat bad any time, but especially not in the first game of a series."

That outing for Dunbar was close to his own personal first game. It was his fifth appearance overall. He ended up getting into three more big league games. He never got back.

Dunbar's career began in 1990, taken by the Yankees in the 25th round of the draft out of Florida State University.

Dunbar played his first year between the rookie Gulf Coast League and short-season Oneonta. He moved to single-A Greensboro in 1991, then AA Albany-Colonie in 1993.

He spent his 1994 season between Albany-Colonie and AAA Columbus. He had a 1.92 ERA over 53 outings on the year.

Dunbar then moved to the Marlins to start 1995, taken in the Rule 5 draft. The Marlins kept him on the major league roster into May.

He debuted April 25, giving up one run over a third of an inning. Over his eight outings, he recorded seven innings of work and gave up nine earned runs for an 11.57 ERA. He picked up is only loss in a May game, coming into the 15th inning, giving up two earned.

The Marlins returned Dunbar to the Yankees and AAA Columbus in late-May. He finished out the year there, serving as a reliever. Dunbar then tried starting.

"My curve wasn't consistent, and that's trouble when you're pitching the middle innings on consecutive nights," Dunbar explained to The Greensboro News & Record the next year. "A starter can work through it. I really wanted a chance to make it as a starter, and the Yankees agreed to let me try it."

Dunbar's stint as a starter was short-lived. He got into 49 games that year over three levels. He started eight of them.