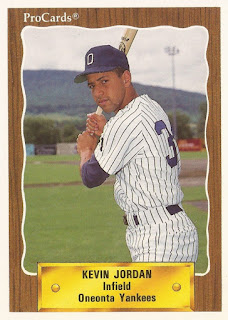 The Phillies called on Kevin Jordan to step in to this April 1996 contest after an in-game injury. He did so and he hit a key home run, according to The Associated Press.

"I'm not a home run hitter. I'm more of a line-drive type," Jordan told The AP afterward. "I was just looking for something to hit and just trying to hit the ball hard."

Jordan was starting his second season in the majors that year. He went on to see time in seven campaigns, all with the Phillies. He's since gone on to time as a coach and manager, including time in his adopted country of Australia.

Jordan's career began in 1990, taken by the Yankees in the 20th round of the draft out of the University of Nebraska.

Jordan started with the Yankees at short-season Oneonta. He made AA Albany-Colonie in 1993. He was then traded to the Phillies for 1994, playing that year at AAA Scranton.

It was in 1995 that Jordan made Philadelphia. He debuted in August, hitting .185 over 24 games with the big club. The next spring, Jordan told The Philadelphia Inquirer he was ready for whatever role the Phillies wanted him to play.

"I want to do the job, whether it's in the first inning or the ninth inning," Jordan told The Inquirer. "But that's the way it is when you're not playing every day. You have to learn to pay attention, to ask about the middle [relievers]. You might only get one at-bat on any given day."

In 2000, Jordan went on a hot streak while replacing an injured Scott Rolen, according to The Allentown Morning Call. He'd started the year cold.

"No one wants to struggle," Jordan told The Morning Call. "But it is part of baseball. The important thing is none of us has gotten discouraged. We've kept a positive attitude and kept working hard. Good things are going to happen."

Jordan's final major league time came in 2001. He continued playing in the minors and in independent ball into 2005.

Soon after, Jordan started a coaching career. He coached with the Phillies at single-A Lakewood in 2007, then high-A Clearwater. He's last recorded as coaching in the minors in 2012 with the Gulf Coast League Phillies.