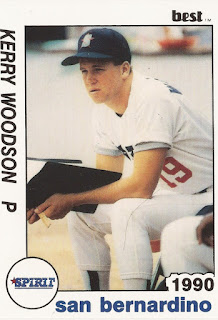 Two runs were already in when Seattle manager Bill Plummer called to his bullpen. Called in was Kerry Woodson, for his major-league debut. He promptly walked the first two batters, then gave up a bloop two-run single.

"I couldn't hit the broad side of the barn for a couple of hitters," Woodson told reporters after the game. "I had big, big butterflies."

It was the start of a professional career for Woodson that had begun as a late-round draft pick for the Mariners in 1988 and wouldn't end until 12 years later, in 2000. But his major league career would end just about a month after those first two walked batters, injuries helping to see to that.

But Woodson would end up hitting two in his short eight-appearance career, not barns, but one Barnes. And hitting that Barnes may or may not have been intentional.

It was his second appearance, on July 21. Woodson had pitched a scoreless inning when he hit Tigers batter Skeeter Barnes, who quickly charged the mound. Benches cleared, both Barnes and Woodson were ejected.

The AP account of the game had Barnes bunting in a run in his previous at bat, with a three-run lead. Plummer, after the game, told reporters there was nothing to the pitch.

The second time, Aug. 8, there was no talk of intent. A pitch got away from Woodson, hitting Ranger Jeff Frye. Instead of going to the mound, Frye walked back to the dugout, according to a wire account.

Woodson was called up that July after spending parts of four seasons in the minors. He made AA Jacksonville in 1991, then AAA Calgary and Seattle in 1992. Then the injuries started coming.

That year in 1992, despite his call-up, Woodson was on the disabled list twice with elbow problems. During spring training 1993, the tenderness in the elbow came back. An exam led to surgery, Tommy John surgery.

A comeback try into affiliated ball in 1998 fizzled. He went 6-10 with an ERA approaching 5.50. Two more years in independent ball and Woodson was done.

But, back in 1992, after his third appearance, Woodson was positive. He appeared to be referencing two double plays during his 1.2 innings of work. But, given what would be a short major-league career, it could be mistaken for something else.

"When you get an opportunity," Woodson said in an AP account, "you've got to take advantage of it."