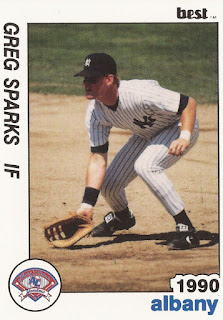 The situation was pressure-packed, The Spokane Spokesman-Review wrote: Bottom of the ninth, two on, two outs, down by one.

Spokane hitter Greg Sparks responded to that pressure but knocking a game-winning triple, The Spokesman-Review wrote.

"I like getting in those situations," Sparks told The Spokesman-Review afterward. "The pressure doesn't bother me."

Sparks went on to face pressure situations for the next 12 seasons, eventually going from short-season Spokane up to AAA. Sparks never made the majors, but he has gone on to teach others how to approach just those situations, serving as a coach and manager in the minors.

Sparks turned pro in 1984, signed by the Padres as a fifth-round pick in the January draft, out of Mesa Community College in Arizona.

Sparks also turned pro having some from a pro baseball background. His father Joe Sparks played more than a decade in the minors, before turning coach and manager.

The father also inadvertently got his son in on one of the game's most notorious nights, Disco Demolition Night. Joe Sparks served that year as the White Sox third base coach, the son as bat boy, according to The Modesto Bee.

With the Padres, Sparks started at Spokane, hitting .252 over 67 games. He stayed with the Padres and at single-A for the next two seasons. He then moved to the Oakland system.

Sparks played 1987 between single-A Madison and AA Huntsville, returning to Huntsville full-time in 1988. After spending a season with independent Salinas, Sparks moved to the Yankees and AA Albany for 1990.

For 1991, Sparks moved to the Pirates, and got his first look at AAA. His first game ended up being against Toledo, managed by his father. The Toledo Blade took the occasion to speak with both the father and son about the past and the future.

"It is ironic," Sparks told The Toledo Blade. "Sometimes you sit back and wonder what you're doing and how long it's going to take you to get to the big leagues. Then I look at my dad and he's been in baseball for over 30 years. That gives me drive and he's still got drive."

Sparks continued playing in the minors through 1996, seeing time at AAA in three seasons. He last played in 1996 with independent Lubbock.

Sparks has since gone on to be a coach and a manager in the minors. He spent two seasons as manager at short-season Southern Oregon, then four seasons as Modesto. He then spent eight seasons as Oakland's roving hitting instructor.

For 2012, Sparks moved to AAA Sacramento as hitting coach, a job he continues in for 2013.

"I know the Oakland A's system. I know every hitter we have in the organization," Sparks told MiLB.com after taking the Sacramento job. "I'm really excited to be with the guys, spend the summer with them and help them get to the big leagues."